This is the second version:

Ksst wiped the sweat from her eyes and swore lightly under her breath. Missouri in August was just too hot. She was excited, too, though as her friend Ronnie and DM had disappeared a little way down the stream. Ronnie said she knew of a pool where they could cool off. She and DM had been joking about skinny dipping, and ksst was ready to get out of her sweaty clothes. Especially her underwear, which was wet, and not in a good way. Dipping her sandaled foot in the cool stream, she hoped she would find them soon. They had all been flirting earlier together, so ksst was excited to continue the conversation.  Ksst also was secretly eager to see Ronnie in a swim suit, or possibly naked. Ronnie was tall, with long hair, long legs, and breasts DM had described as luscious on more than one occasion. Ksst has also heard a rumor that Ronnie had shaved her pussy, and wanted to see if that were true. DM had been asking ksst to shave, and she was decidedly dubious. It sounded stubbly and itchy.  Ksst's pace increase as she walked up the stream; she hoped she would find them soon. Walking another dozen meters, ksst heard Ronnie's high throaty giggle, some wet sounds, and another giggle. Then she heard DM's lower voice make a pleased 'hmmm.' noise. Ksst's face brightened, as she walked even faster, heart beating. She pushed through some bushes, and there they were, standing naked in a pool. Ronnie's back was to ksst, and DM was applying sun screen to it. Apparently, it was cold, as every time DM applied a handful, Ronnie giggled. Or maybe she was just wiggling and giggling for effect. Either way, it was certainly fetching. Ronnie looked extremely pert and luscious standing naked in the water. ksst could just imagine her 'accidentally' rubbing her tight ass across DMs hot loins, or maybe hers.

Ksst stepped into the clearing and called, "Room for one more?" Ronnie and DM both turned, and ksst could tell by their smiles that they were expecting her. Ksst also noted Ronnie's flush and DM's partial erection that this was going to be exciting. DM called "Hello!" and waved her over brightly. On the other hand, looked much less pleased, her large chest heaving, her pert pink nipples hard and bobbing, but she also smiled brightly. Time for fun, ksst thought, and took off all her clothes. She hadn't been wearing much already, so it didn't take long. Giving Ronnie a lingering, smoldering, look, ksst noted that she was indeed shaved as she sashayed over to DM, and gave him a big hug and lingering kiss, then said, "Will you sunscreen me, too? and be sure to get my breasts. I don't want them to burn." DM smiled a wicked smile, and squirted a thick stream of white lotion onto Ksst's breasts. She shrieked and giggled as the cold lotion hit her hot skin. DM shrugged. "The cooler was the easiest place to keep it," he said glancing over at the partially opened cooler.

While DM applied sunscreen to ksst's entire body, ksst watched Ronnie. It was clear DM had not applied sunscreen to her front or her back below the waist. Ksst offered to help with them then shimmied and yelped as another stream of cold sunscreen hit her tummy. Ronnie smiled back and replied that she had enough of the cold sunscreen.  DM's back was to Ronnie, and as he applied sunscreen to ksst's thighs, ksst considered her. She was taller than ksst, with long light blonde hair. Her breasts were firm, with large nipples, her waist was trim, but ksst thought her ass was nicer than Ronnie's. Ronnie kept up a stream of light flirty talk with her as DM finished applying the icy sunscreen. It made ksst's nipples as erect as Ronnie's.

All three played in the pool, laughing and splashing until DM discovered a sandy spot and began building a sand castle. Ksst and Ronnie continued to laugh and splash for a few more minutes, then came over and sat in the shade, watching DM work. Ksst watched Ronnie walk over and practically hang her tits in DMs face while admiring the castle, but was gratified to see how little attention DM paid to her. Apparently miffed, Ronnie turned, wiggled her ass at him then wandered back into the shade, with DM followed shortly after.

Sitting in the shade, talking and laughing, ksst couldn't help noticing Ronnie's quivering chest, or how frequently her legs were wide open. Her cunt was completely shaved, with just a landing strip of pubic hair, and ksst frowned thinking how she had refused when DM had asked her to shave her cunt. She pulled him closer, and wrapped her arm tightly around him. His arm curled around her waist, and his fingers brushed her curly cunt hairs. Then he stood up, announcing he had to wander off for a minute. As he stood, his head dipped towards Ronnie, and Ronnie gave her cunt a light slap. Not to be outdone, Ksst slapped her furry cunt, too. DM reddened and stiffened, then turned and walked off.

Ronnie grinned at Ksst. "Do you think he's going to jack off? Maybe we should go watch. Maybe we should offer to help!" Ksst grinned back."I don't think so, but I bet we will have fun tonight." Then she shyly turned her head away and said, "How did you do that? Shave, I mean. Is it nice? I thought it would be itchy and stubbly, but yours looks nice." Feel it," Ronnie replied, taking Ksst's hand and running it up and down her lips. "I can teach you how to do this. You just need the right tools. We can get together later, and you can surprise DM." Then they jumped apart as they heard DM returning. "Either he is really fast or he didn't." Ronnie laughed. "We have him pretty worked up, but he isn't usually that fast!" ksst smiled back.
"What are you two giggling about?" DM asked as he sat, but Ksst and Ronnie just giggled a little more and said nothing.

Ronnie stood up and said, "Almost time to go!" but instead of walking to her clothes, walked around to ksst and started stroking kssts hair. Turning her head slightly, ksst looked full into Ronnie's crotch. Small drops of water and grains of sand glistened in her scant pubic hair. Ksst was surprised to see how swollen Ronnie's lips looked, and how her clitoris poked out between them. Ksst even thought she smelled a deep musky scent.  "Before we go, though," Ronnie laughed lightly, "I think I should admit I really want to suck DM's cock. He wants to suck my nipples, and ksst wants to eat my pussy, so I think there is something here for everyone." She then gently turned ksst's head into her waiting cunt. Ksst took a deep breath, and began to kiss it gently on the outside, like she remembered enjoying when DM ate her pussy. She ran her tongue over the swollen lips, and inhaled Ronnie's musky scent. DM stood up and kissed Ronnie deeply, gently fondling her left breast as he did. Ksst broke off in consernation. "We don't have any condoms here," Ronnie replied, "So unfortunately fucking is out. Let's get a little more comfortable." Ronnie lay back on a blanket and spread her legs. Ksst began eating her again. DM started to move up to Ronnie, but she motioned him back to play with ksst. Ksst hardly noticed his hands on her breasts or the way he pinched her nipples, but rubbed and bucked against DM's fingers in her cunt. Moaning, ksst licked Ronnie even more enthusiastically. Ronnie giggled and moaned, and moved her hand to ksst's head, guiding her with her hair to the most sensitive spots. Ksst was moaning and bucking against DMs fingers, when he suddenly entered her. Ronnie started coming, and ksst started coming, and all she could think was, "What if DM doesn't get his blow job? He'll be so sad!" Fortunately, DM pulled out before coming.

Ronnie then pushed him on his back on the towel, and motioned ksst over. The two of them started passing DM's cock back and forth. As ksst sucked it, Ronnie told her how good she was, how she loved the way ksst ate pussy, and how good ksst's pussy tasted on DM's cock. "Now I'm going to let him suck on my titties. You keep him good and hard with your mouth, but don't let him come," Ronnie announced, straddling DM, and dangling her tits in DM's face. Ksst could hear sucking noises and DM's low moans, and she sucked DM's hard cock. It was so close to Ronnie's cunt. Ksst lay between DM's legs, sucking his cock, and staring into Ronnie's dripping cunt. It was too difficult to finger Ronnie and Suck DM at the same time, so ksst concentrated on DM, only occasionally kissing Ronnie. Ronnie finally turned around, planted her cunt in DM's face, whispered, "My turn," and began working DM's cock while staring into ksst's eyes. Every 4 or 5 strokes, she would come off with a big pop, give ksst a kiss, and push her head down on DM's throbbing organ. ksst mostly ignored DMs muffled moans of pleasure. Suddenly, he moaned and grunted, and ksst watched DM's throbbing cock pump into Ronnie's hungry mouth. As DM came, ksst watched Ronnie come again. DM's cum dribbled out of her mouth onto her tits as she moaned. Ronnie reached out, grabbed the back of ksst's head, pulled ksst to her, and kissed her deeply. ksst savored the taste of Ronnie's mouth and cunt mixed with her man's cum. Then all 3 collapsed in a heap.
- February 20, 2020

Yesterday my Master knew I really needed some butt whackins.  I kept thinking it hurts too much, but it really wasn't that bad, I've...

ancilla_ksst
I am an owned slave. I am married to my Master, and have been since 1993. The addition of a M/s relationship to our marriage is relatively recent (2011), and if you'd like to read more about how it developed, see the first two blog entries "Beginnings" and "The next chapter". We live on a small farm in Wisconsin and have two kids. A list of my favorite posts can be found here, if you are looking for the "meaty" topics, they are here: http://slavetomasterblog.blogspot.com/2015/01/favorite-topics.html 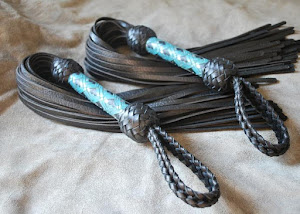